Saturday at the Painting Studios: A Tour with Micah Franklin | Minneapolis College of Art and Design Skip to main content

Saturday at the Painting Studios: A Tour with Micah Franklin 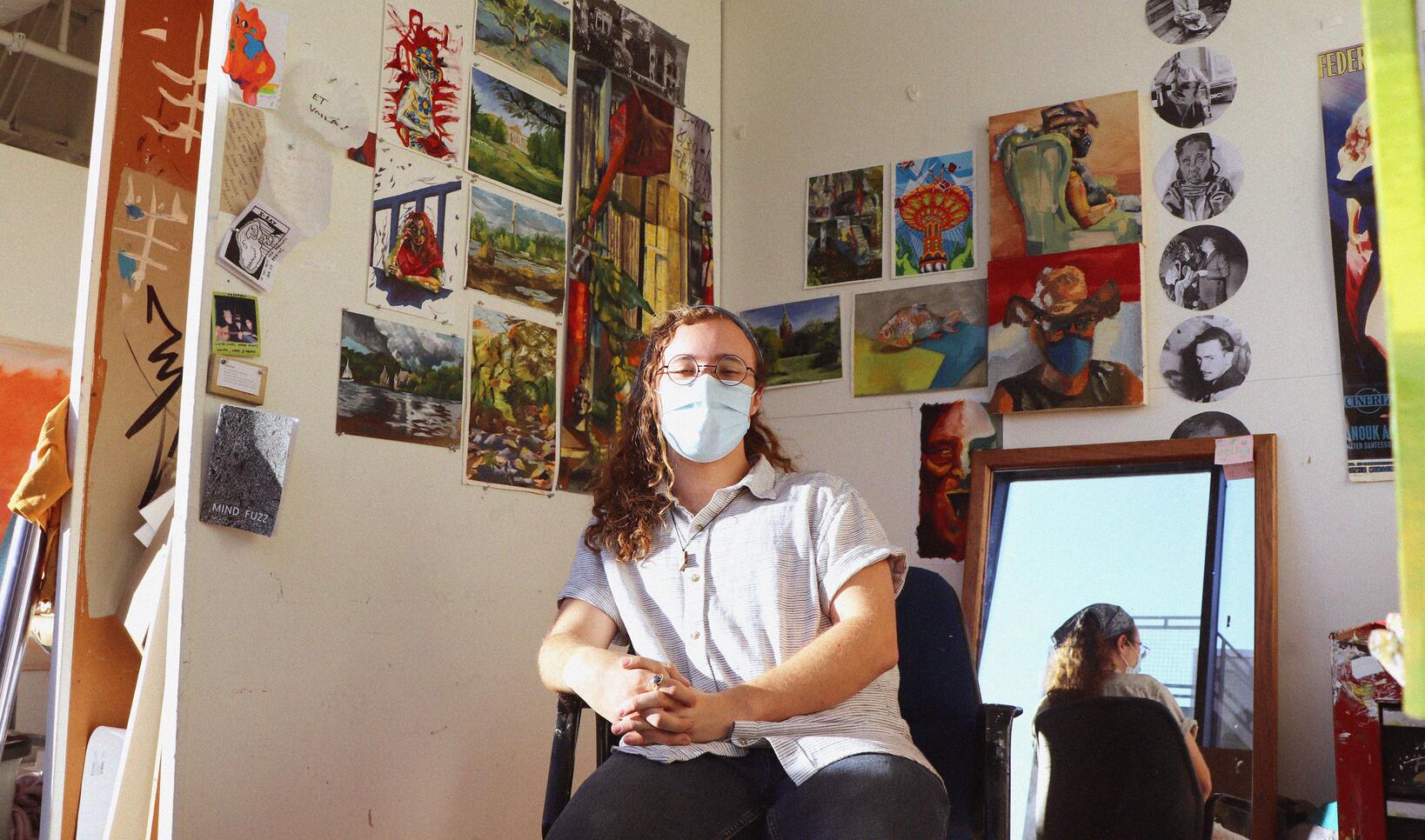 They say a person’s room can reveal a lot about them, and I choose to believe the same proverb can be said about an artist and their studio. Every paint stain and used tissue paper shoved into the crevices tell a story and bear a personal significance. One of the studios at MCAD that has long fascinated me belongs to Micah Franklin ’24, so I decided to take my own adventure to his studio and learn more about what makes Micah's painting studio his space to create.

I’m sitting in a blue chair that tilts so far back that one wrong shift could send your feet waving in space, but yet the experience in Micah’s studio is grounding. The rare empty spaces throughout the whole third floor painting studios are saturated with a wash of the 4:00 p.m. golden sun leaks. With every step closer to feelings of nostalgia and warmth... 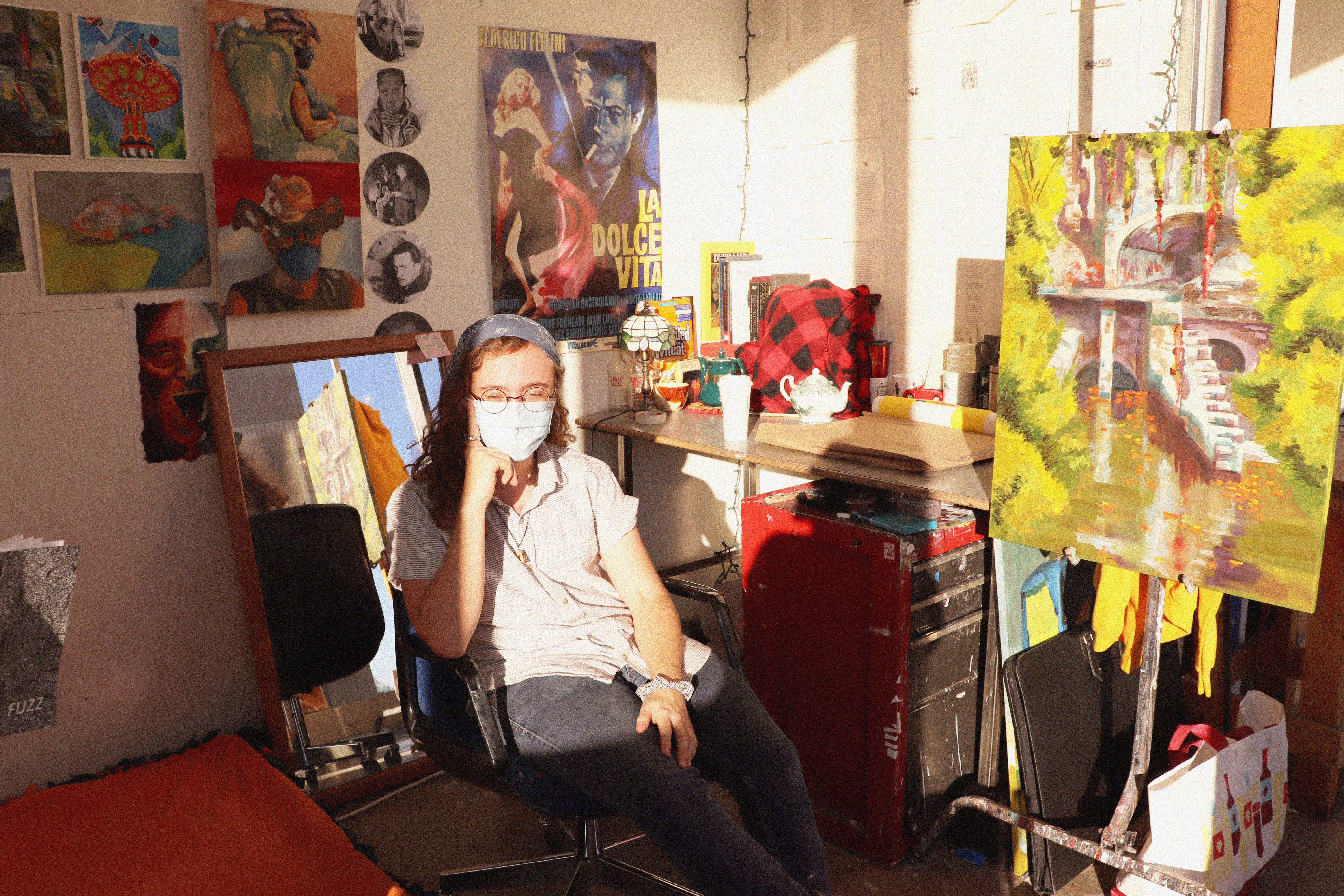 What is your major, and why did you choose it?

I’m a Fine Arts Studio with a concentration in drawing and painting. I came in initially as an Illustration major because I was thinking of the career options as far as actively creating art, but I think especially after my first illustration class, I got to the point where I was like, “I’m drawing for other people all day. I don’t think I’ll be able to draw for myself and draw what’s in my heart,” and I think once that sort of took root, then I started looking at more viable career options within the fine arts field like curation and I guess non-profit work and teaching artists.

What are three words you would use to describe your art practice?

I think introspective, objected—dealing with the painting as an object rather than trying to create this illusion—and textured.

How long have you had a studio at MCAD?

I’ve had a studio since the beginning of the semester, almost three and a half months.

What are three words you would use to describe your studio?

Cluttered, relaxing on a good day, and I like to think homey.

How did you go about personalizing your studio?

The first thing I did was I adjusted my furniture, and then I created a poetry wall. When the library did their book sale, I found a really cool poetry book by P.B. Shelley, and I cut it up and put it all over my wall because the way that the aesthetic of poetry oftentimes reflects the visuals that exist in my work. Then, as the semester went on, I put up my work...and then I got a cot!

This is where I come in, admire, and say, “The cot! The infamous cot…”

How do you set the mood in your studio before getting to work?

I think it depends. If I’m working on something large-scale, typically it means just jumping right in because the piece and the amount of oil paint and the set up you need takes up so much space. I think if I’m drawing, especially if I’m doing automatic drawing, I’ll do low lighting. That would be ideal, but you can’t always do that with other people in the studio, and I also like to put on some music that is not super rock heavy but not like smooth jazz that’ll put me to sleep, so something in that in-between zone. I listen to a lot of Still Woozy and swing music.

What is your favorite thing about your studio?

I think it’s the items that I have in here because a lot of them come from people back home and people that I’ve walked through life with that aren’t necessarily here with me right now. That’s why it feels more homey to me—because there’s certain artifacts that I remember a lot of things about.

How often do you use your studio?

It depends. If I’m doing a lot of smaller work a lot of times I’ll just do that at home but most of my work is pretty big so I’m in the studio pretty often. If I have the chance to do something outside the studio, I like to take it, but especially with painting, I’m in here a ton because it’s my major so I’m doing a lot of it.

What is the latest project you’re working on in here?

For my Ideation and Process class, I’m doing an installation in one of the alcoves that is essentially a spiritual critique on modern day American consumerism and all that junk that’s often tied with that. I’m creating some different pieces for that and doing a performance alongside it.

Do you have any interesting stories or things in your studio you’d like to talk about?

Gosh...I think it would have to be a lot of the items on my desk. I’ve got some statues that my dad brought back from Lebanon and a mug that he sent me from Columbia. And then, teapots that my friends have given me, and a little toy car my grandpa gave me. I think those would be like the random stuff on my desk that were given to me by specific people.

Studios are a treasured place. Any place where one creates is sacred, and the opportunity to enter another artist's studio should be celebrated for the insight and introspection it provides us. Thank you, Micah, for hopefully the first of many studio visits this year! Now, onto the next one. 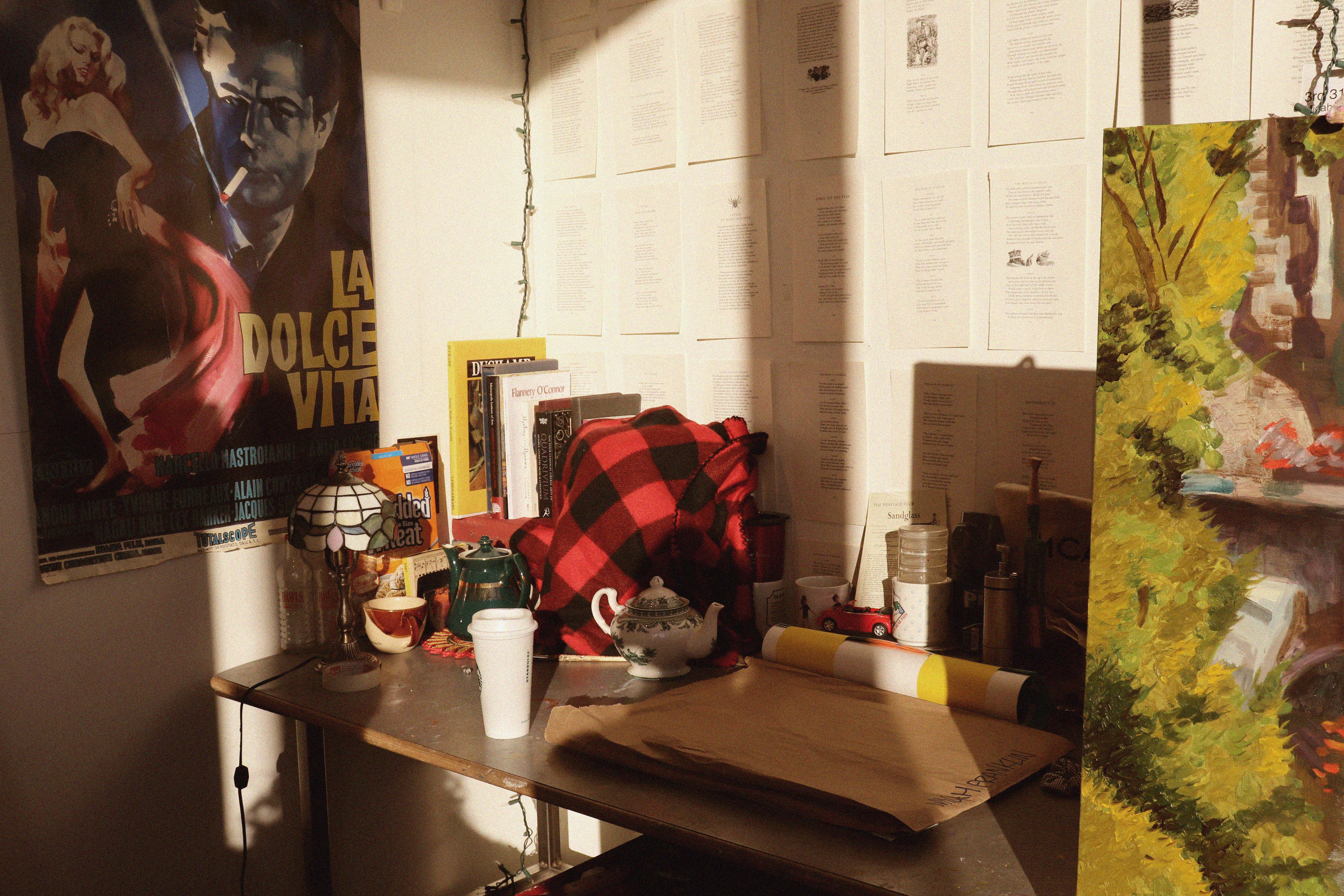