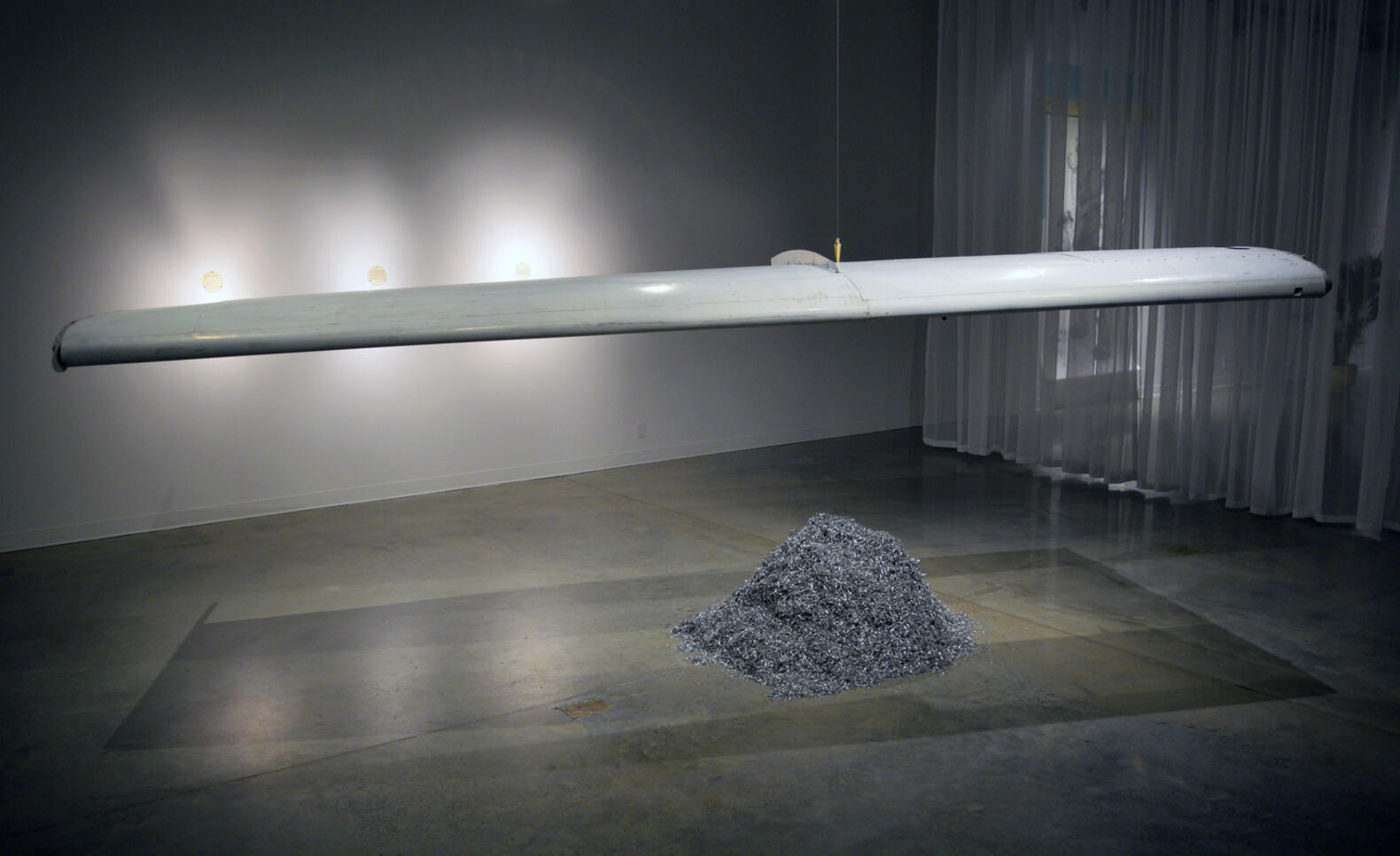 Nooshin Hakim Javadi works at the intersection of sculpture, installation, and performance. As an Iranian now living in the United States, Javadi’s practice investigates the material culture of conflict, displacement, and transition, considering how these experiences are internalized by the body. She received the Outstanding Student Achievement in Contemporary Sculpture Award from the International Sculpture Center in 2017, while completing her MFA in Studio Art from the University of Minnesota, Twin Cities. Her interdisciplinary works and performances have been shown in the United States, Germany, and Iran including the Museum fur Neue Kunst, Freiburg, Germany; Parks Exhibition Center, Idyllwild, CA; Grounds for Sculpture, Hamilton, NJ; Kunstverein Grafschaft Bentheim, Neuenhaus, Germany; Milwaukee Institute of Art and Design; Plains Art Museum, Fargo, ND; South Dakota Art Museum, Brookings, SD; Walker Art Center; Weisman Art Museum. Javadi is the recipient of a 2017 Franconia Sculpture Park Jerome Fellowship and was a 2018/2019 Target Studio for Creative Collaboration Fellow at the Weisman Art Museum. She is currently a Visiting Assistant Professor of Art and Art History at St. Olaf College.

In this interview Nooshin Hakim Javadi provides insights into her interdisciplinary practice that uses common objects to embody complex metaphors, histories, and alternative points of entry to our socio-political present.

You describe yourself as an interdisciplinary artist who investigates the material culture of conflict and displacement via sculpture, installation, and performance. Your work incorporates games, comforting lullabies, replicating historic rooms, and coating objects in copper sulfate. I’m curious to learn more about these and other creative strategies/investigations. More specifically, how you use displacement to find a sense of place?

There are always opportunities to involve others in my work, beyond simply being observers. I’m making work that touches on topics that are pretty heavy on their own, so that’s why I employ these types of interventions and techniques. That’s why I employ familiar language of games, for one, which gives me the opportunity to make a humorous, interactive point about a particular issue. In Exporting Liberty, Statue of Liberty foam stress toys, the type of thing you might find in a New York City tourist trap, are repurposed as darts. A cork silhouette of Iran acts as the target, with Tehran at the center of its bull’s eye. Players are invited to step up and strike major Iranian cities, as well as targets that stand in for the country’s energy economy: oil, natural gas, mining, and (of course!) the nuclear power.

In pieces like this, I look for conflict and make work that can define the conflict, incorporating the familiar language of a game so that people can enter into the experience. It gives a variety of viewers an opportunity to grapple with the larger themes and playing out the social aspects of compromise, conflict and collaboration, with a sense of humor and an invitation to participation. There’s a focus on the social aspect of how artwork can be experienced interpersonally, or the social framework that artwork can facilitate, whether that is in a museum or gallery, or—more often than not in the case of much of my work—beyond those walls.

When you take work beyond the gallery. For example, working at the Weisman Art Museum on the Rhizome Radio project, we had the opportunity to collaborate with the law school’s immigration clinic, who were working with undocumented immigrants in rural Minnesota. We realized through our conversations was that communities, in the context of public art or community-based artworks, don’t always require “artworks” in the form of sculpture, but rather artwork in the form of platforms for access to safe information. Artists can be part of these processes, working not just with cultural institutions but with legal, activist, and community-based groups. That’s how you create a sense of place, by involving people in the work. 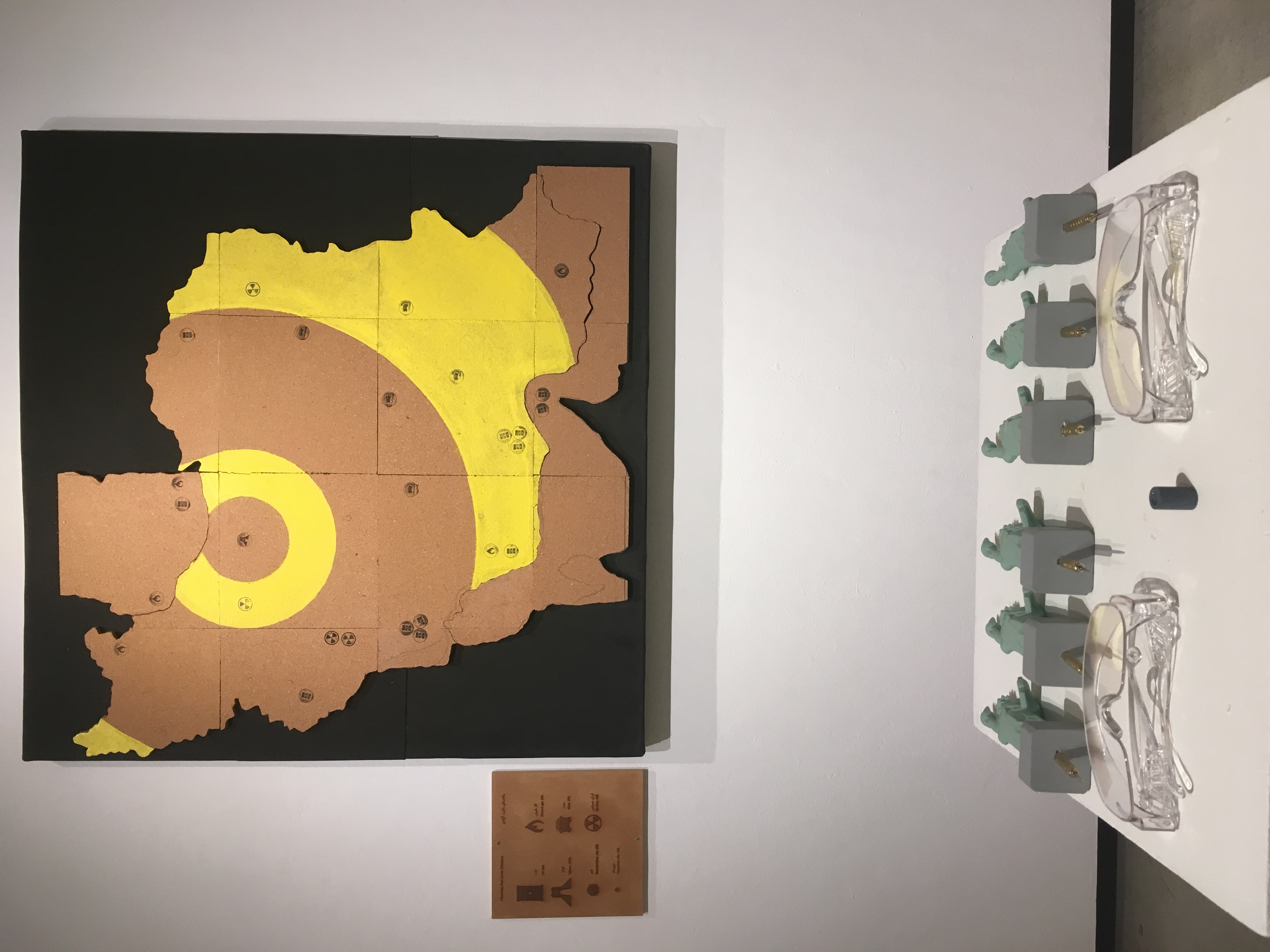 Themes of political entropy, policed mobility, and navigating life as a non-resident alien weave themselves throughout your work. Could you talk about a specific piece or project that describes these ideas?

Violet Diaspora was a work that was installed onsite in Neuenhaus, Germany. It features a mirrored-image of a world map, outlined in sand atop a large pile of peat. These materials were excavated from the Neunhaus, a town in northwest Germany, where forced migrant labor was historically used in peat mining. Planted with thousands of grass seeds, viewers were asked to water and care for the new turf that was beginning to emerge. Over time, borders began to dissolve, blurring the boundaries between where one country ends and another begins.

Outside of the landmass, situated in what would be the Indian Ocean, there was an open backpack. This backpack was given to me by a Syrian refugee named Mohammad Khaled, who carried it with him and gave it to me, asking me to make art with it. I incorporated it into this piece, as the container for the seeds that made up the turf.

The piece needed to be watered daily—made up of turf, it would whither and die without watering. The success of the work was dependent on the participation of the community. In this case, the community tended to the piece, and at the end of the exhibition, the borders disappeared and it was an unbroken plane of grass. Synonymous with contemporary migration, Mohammad’s backpack was a stand-in for being a container for one’s entire existence, harboring fragments of home and family. Violet Diaspora makes viewers aware of how much migrations of people and culture need the care of the communities around them to survive.

You mentioned strategically using common objects as markers of time and place, offering alternative points of entry to the socio-political present. Although you are using everyday objects, your material choices embody complex metaphors, histories, and human experiences. Could you tell us more about how you identify which objects to use in your work? Do the everyday objects drive the work or is the concept at the forefront of your process?

Well, even the most common object has an infinitely complex aspect to it, when viewed from a certain perspective. My job is to create the opportunity for that perspective.

One of the first times I began incorporating everyday objects into the work came out of necessity. This was when I was in school in Tehran, during some of the protests against the regime. The focal point of many of these protests were Tehran’s universities, one of which I attended. The sculpture studio, where I worked, was centrally located on campus, and would transform during these periods of protest into hubs of assistance for protestors.

And so at night, when the protests would wind down for the day and everyone would go home, the police would meticulously clean the streets, erasing any sign of human presence left behind in the aftermath, any sign that anything had been amiss. Those everyday objects left behind in the protests were, in some ways, a humanizing aspect that it was in the interest the authorities to erase.

It was in the half-hour interim period before the cleaning crews would show up that me and a friend would hide during the security change shift, and then go out to collect objects that people had left on the streets—bullets, masks, shoes, broken glasses, even a pair of pants. What’s more of an everyday object than a pair of pants? And what wild series of events led to them being discarded in this way?

Several years later, these objects I collected traveled with me to the United States, acting as relics, in a sort of traveling reliquary. The term “relic” comes in part from the Latin linquere, “to leave.” That’s a very complex set of emotions, experiences, and metaphors, those involved in leaving a place. The relics, or objects, or however one might look at them, bridge that gap between something so deeply unknowable between people. They create a physical reminder, or a type of stand-in for the breadth of the experience.

Are there specific responses that you hope viewers or participants will have after engaging with your work?

Not the response, necessarily—I have no control over that. I certainly know what I’d like people to consider with my work, whether that’s seeing the humor or absurdity, or thinking about systems and relationships between people and cultures. But really, I think of my work as establishing a set of parameters that I can invite the viewer into it. What they do and how they experience that once they’re inside is up to them. I can only proffer the invitation. The crux of the work is in that negotiation between what I hope for when I extend the invitation, and how the person experiences it once they’ve accepted it. Hoping for a specific response beyond that is a bit of a fool’s errand.

What artists, writers, musicians, exhibitions, performances are inspiring you at right now? And why?

The work of Postcommodity has been a reference point for me since I encountered some of their work in the past ten years. The ideas behind their Repellent Fence, one of the first works of theirs I recall seeing, related to the interconnectedness of nations and people across borders, through that specifically indigenous lens, in a way that’s continued to resonate with me as I think also of borders and interconnectedness. The work of the late Iranian artist Monir Shahroudy Farmanfarmaian is a guiding light for me, as well. Farmanfarmaian’s mirror work sculptures, created over decades both in New York and Tehran, draw on a very recognizable idiom and tradition in Persian artwork, cut glass collages, and place them into a contemporary context, in a way I’ve long admired.

If you could describe your practice in one word, what would it be?

“Longing.” It’s a very diasporic concept that doesn’t perfectly sum up everything I do, but if stuck with one word, that’s the one I’d go with. Longing, after all, is nothing if not a response to limitations.