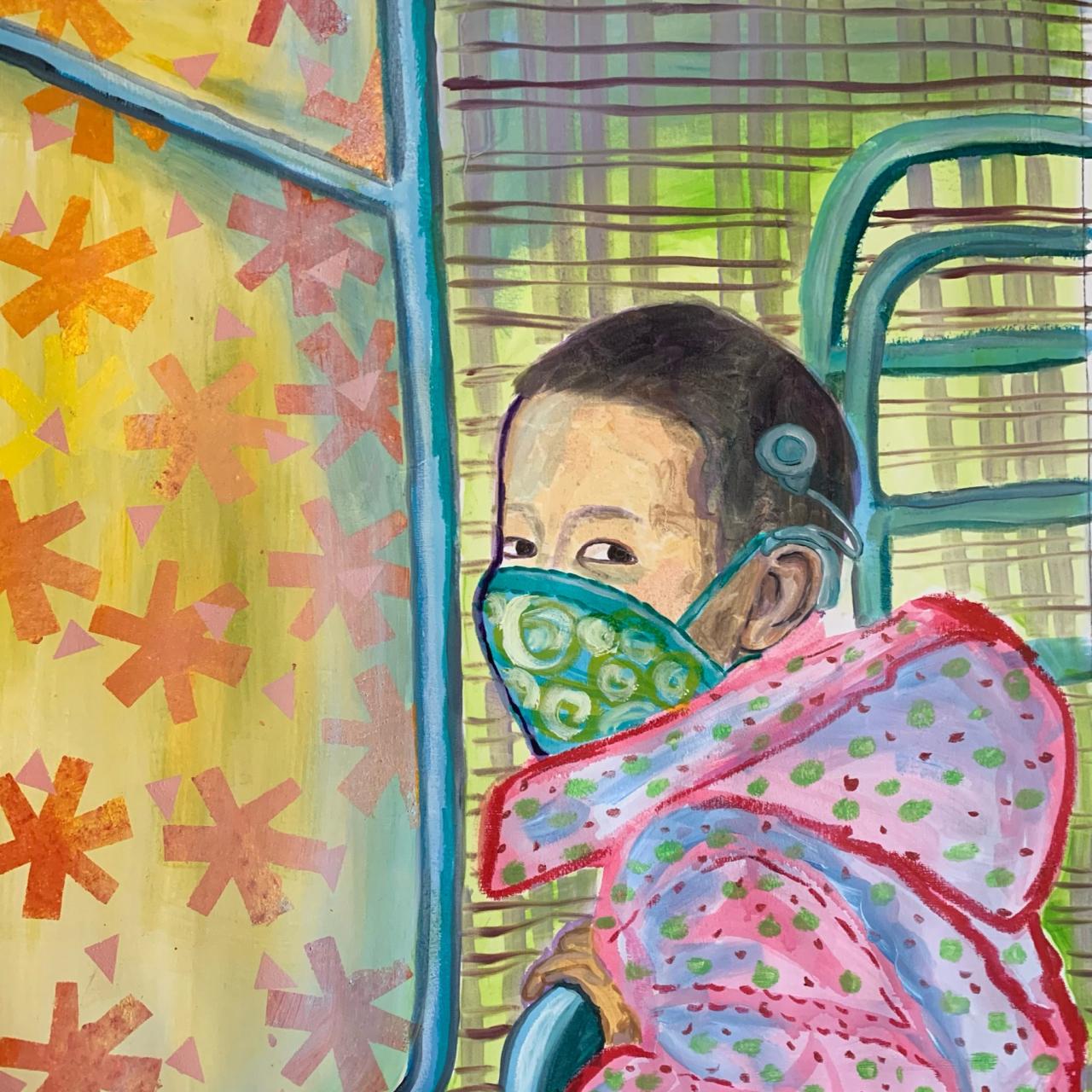 Anika Hsiung Schneider is a narrative artist who draws on lived experiences, memory, and family history. With an Asian Mixed female identity, she resides in a highly racialized body that also exists in a liminal state. This connection to a liminal state of being closely connects her work to themes of loss, transitional spaces, and visualizing the intangible.

Anika currently serves as the Director of Exhibitions and Artist Programs at Minnesota Center for Book Arts and adjunct faculty at MCAD. Anika’s work has been exhibited nationally at galleries such as Soo Visual Arts Center, Rosalux Gallery, Gallery B St Paul, Circle Gallery, Visarts, Dumbarton Concert Gallery, and Glen Echo Park Partnership for Arts and Culture. Anika has also participated in residencies in Wolfsville, Nova Scotia, and Solomons Island, Maryland. She has also been awarded with a Windgate University Fellowship, Gettysburg College Provost Grant, and the InCahoots residency Boost Prize full grant.

Anika currently lives and works in Minneapolis where she enjoys giving a home to secondhand furniture and hiking with her dog Wolly.

Which year did you graduate and what brought you to MCAD for your MFA? Could you speak a little bit about your background?

I graduated from MCAD MFA in 2019. I am originally from Maryland, just outside of Washington DC. In my undergraduate studies, I was a double major in environmental science and studio arts. I was initially an environmental science major, but after taking a drawing course and going to artist lectures, I knew I wanted to pursue art. So I decided to squeeze in a second major. After graduating, I worked at a nature center teaching science-based programming, but continued my artistic practice. I eventually decided I wanted to immerse myself in art and take the next step in developing my practice. Since I felt that I had to rush through my art major, I really wanted the time, space, and community an art and design school could support. I came to the MFA program at MCAD because I was not only drawn to the MCAD community, but the entire arts community in the Twin Cities. I also decided on MCAD’s MFA program due to its interdisciplinary nature and mentorship structure. At the time, I was a painter, but did not want to choose a graduate program where I wouldn’t have the freedom to explore other disciplines. I also wanted to pursue teaching, and was excited about the teaching seminar at the program.

How did your art change while you were at MCAD?

My work changed significantly during my time at MCAD. While I continued painting for my entire time in the program, I was able to evolve significantly as an artist. My work became much more figurative and personal in nature. I also explored painting on a wide range of materials, and even used light and shadow as an aspect of my work. The scale of my work also increased dramatically, from small paintings, to a 5-foot by 28-foot piece I completed for my thesis.

How has your work evolved since your time at MCAD?

Since my time at MCAD, my work has branched out in many different ways. Printmaking has become an important part of my work. I have been making abstract monotype prints that visually explore the impact of language on culture, with particular emphasis on translation and the loss of cultural language. This is my first time really delving into abstraction, and it has been a freeing part of my practice — one that has energized me throughout the course of the pandemic. 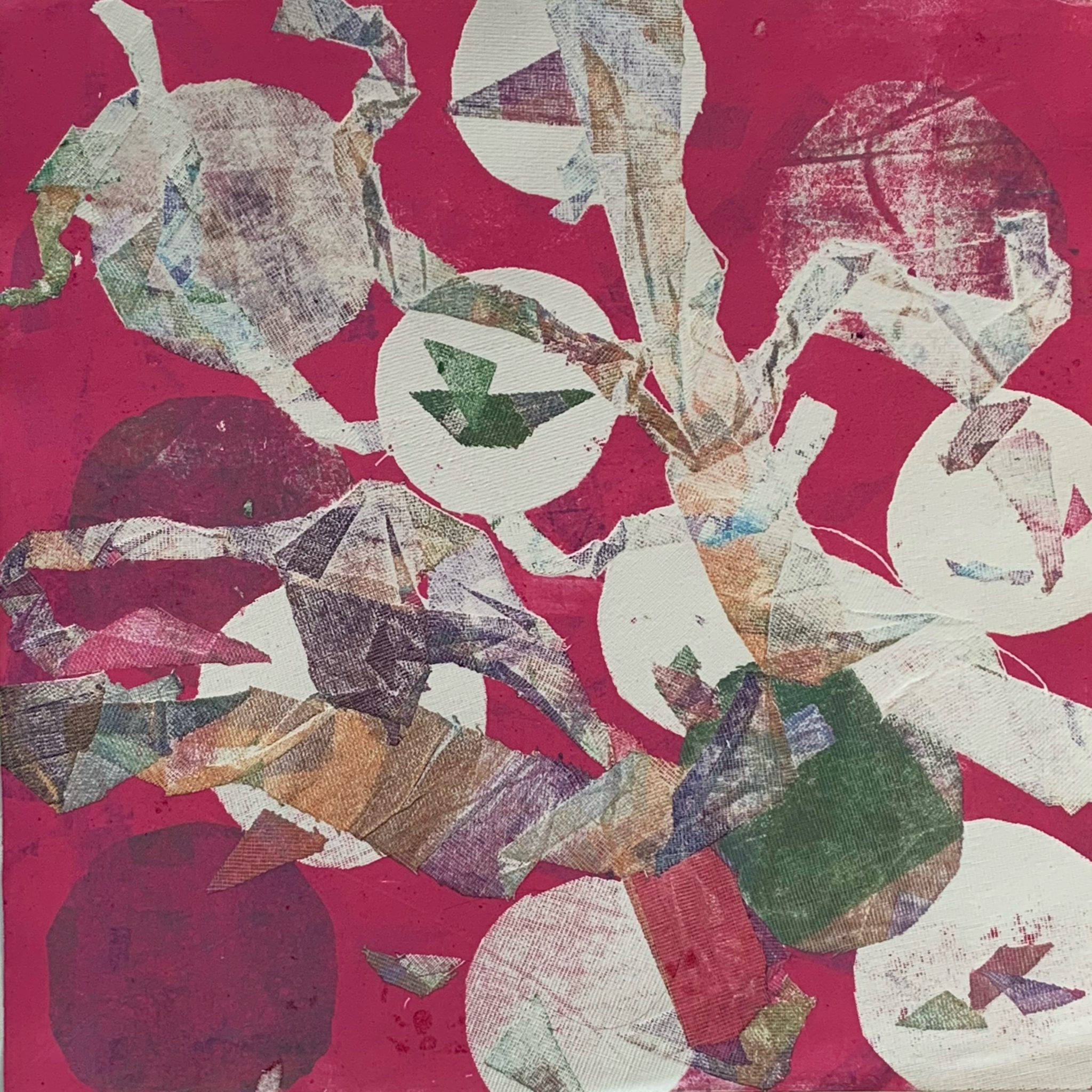 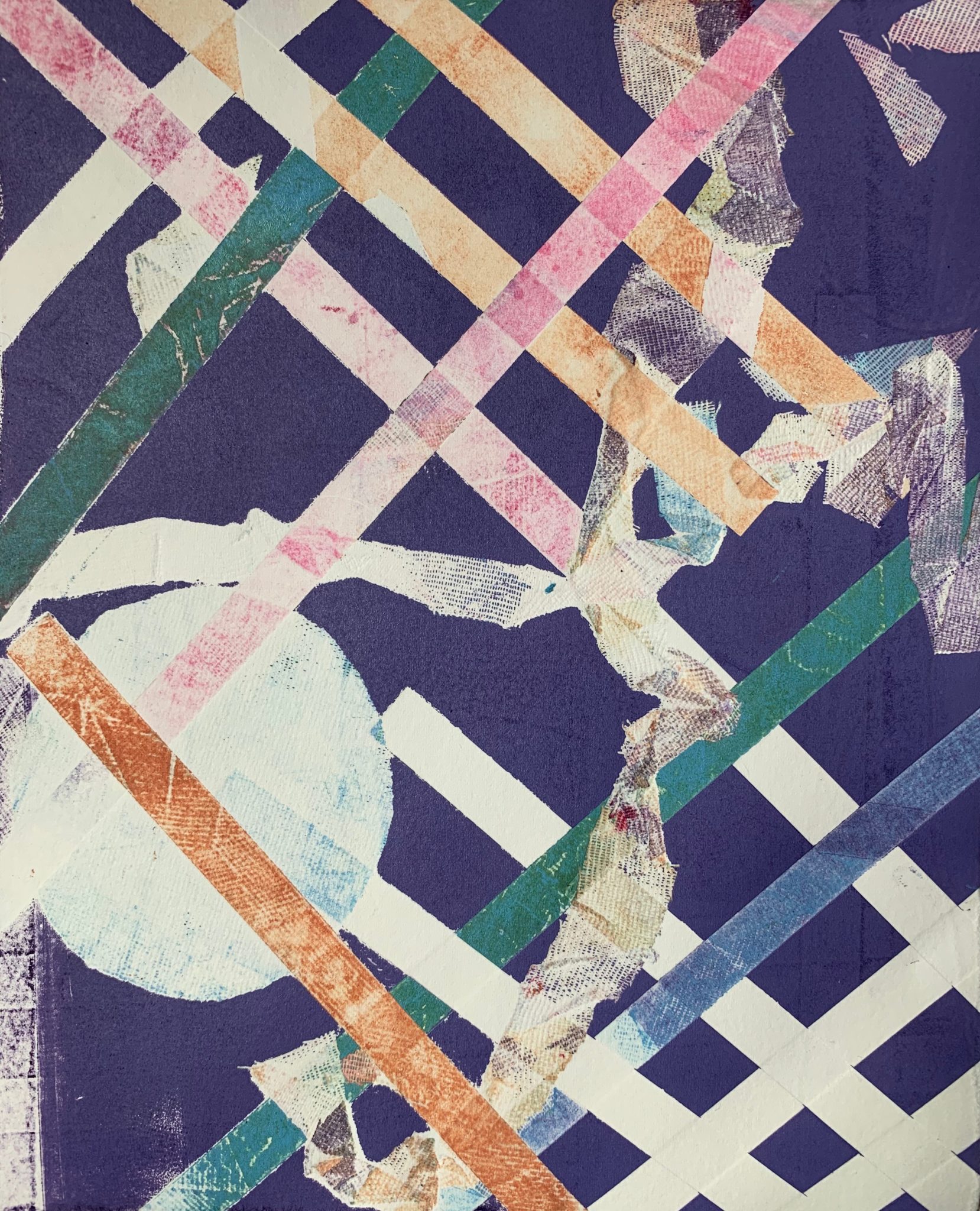 What is next? Any new projects or jobs that are in the pipeline?

I have just completed the artwork for my first public art piece which will be installed at the City of Brooklyn Center’s new transit center in June. This is a multimedia painted project that aims to celebrate Brooklyn Center’s community pride, health, and safety in the time of COVID-19. I learned a lot through the process of making a public art piece, and while working with a team from both Brooklyn Center and MN Metro Transit. Community engagement was also a critical factor in creating this piece. In support of this goal, I was able to work with the team to teach two virtual workshops to Brooklyn Center residents and provide a hundred Brooklyn Center residents with facemask making kits. Now that this project is wrapping up, I will be teaching a course called Mixed Media Toolbox for Narrative Art for MCAD’s continuing education department. I also occasionally teach virtual workshops for the Minnesota Center for Book Arts.

You donated work for the MCAD Art Sale to support our MFA 2020 Fund, which benefits future Black, Indigenous, and People of Color MFA students—thank you! What motivated you to contribute to this scholarship effort?

I was motivated to donate work to the MFA 2020 Fund to support fellow artists of color. As an artist of color, I know the challenges fellow BIPOC artists face, and I want to contribute to increase opportunities and access for these artists in every way I can. 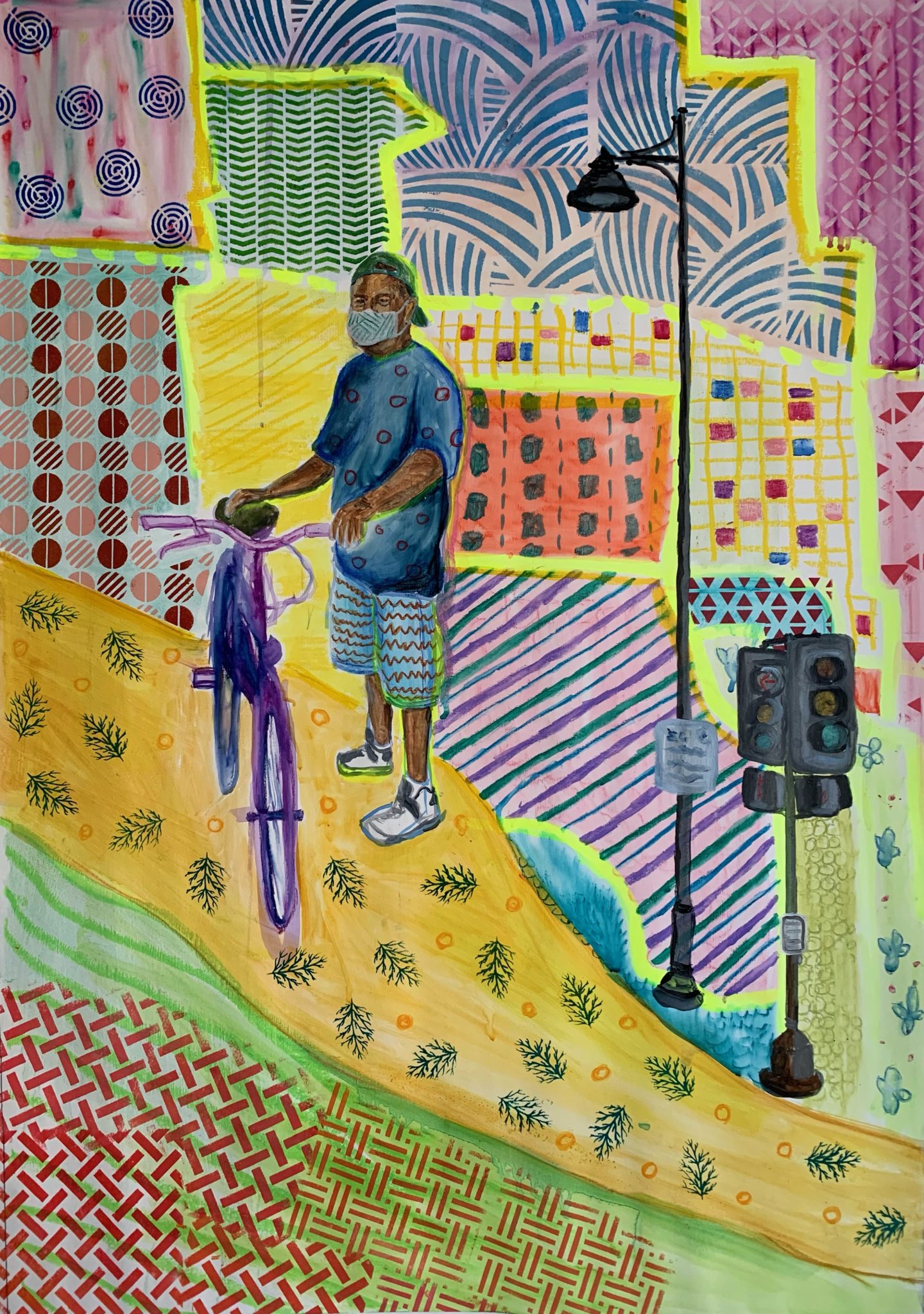 What’s your exhibition about?
My show Chinese-ish is about familial ancestry, childhood memory, and redefining my identity on my own terms. Chinese-ish is a narrative exhibition that draws on lived experiences, memory, and family history. In my work, I am manipulating and reimagining Chinese imagery through a multimedia approach including painting, monoprint etching, and ceramics in order to translate the visual images that I grew up with to deepen my connection with my ancestors.
What inspired you to make this work?
Attempting to understand and reconnect with my Chinese culture inspired me to make this work. To make this work, I traveled through my memories to childhood, seeking a path to my ancestral lineage to connect with what has been lost. In my practice, I mix culture, tradition, and memory to metaphorically and literally cut and build a narrative space for me and my story to reside. This work also naturally grew out of past projects and work that investigated similar themes. From my past work, I made the transition into making this work which more closely deals with my identity.
What was your experience like working with SooVAC as part of the MFA launch program?
My experience with working with SooVAC was really great. The entire team helped to support me through the whole process. It was an opportunity that was incredibly meaningful to me and that I will continue to cherish. Being able to work with SooVAC on Chinese-ish led to an incredible amount of growth in my practice that I am so thankful for. I am very excited to see how this period of growth will impact my work moving forward. 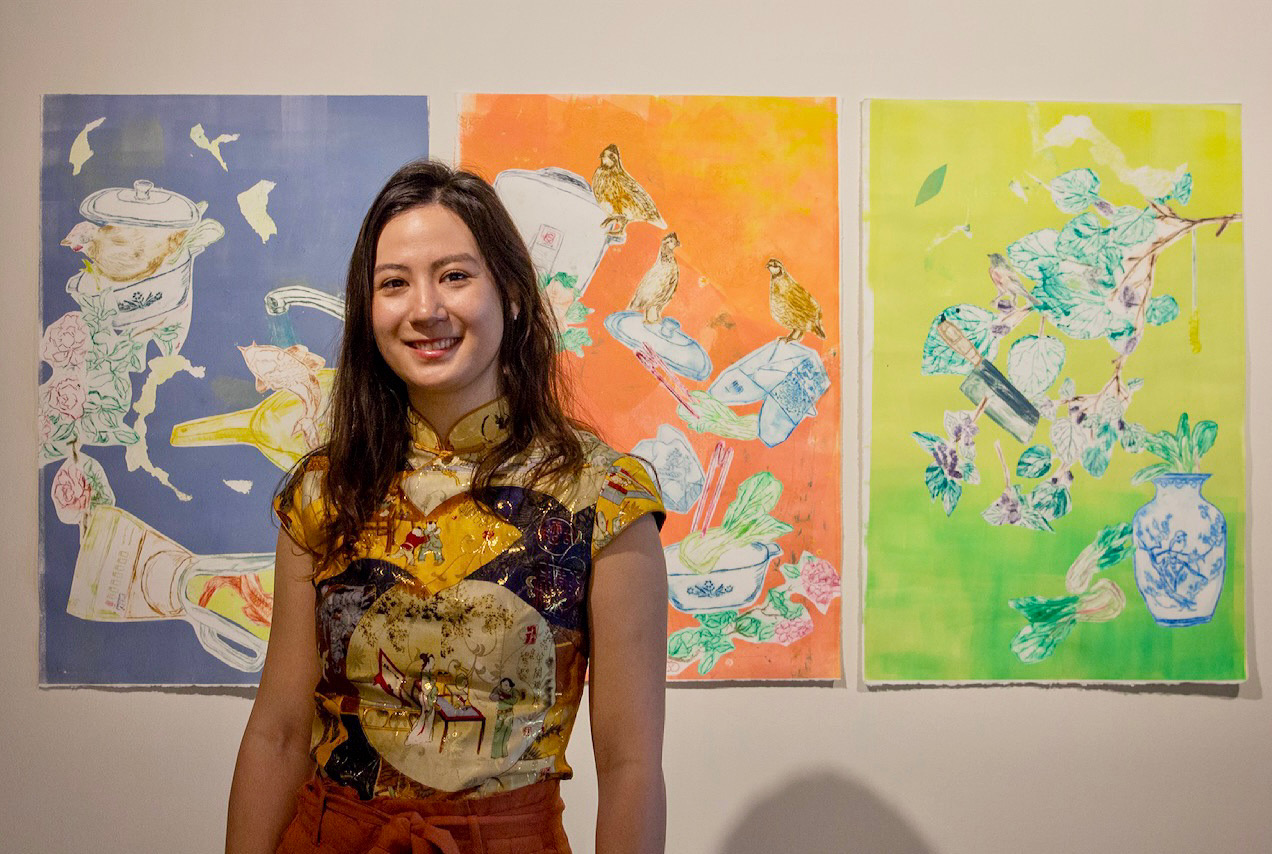