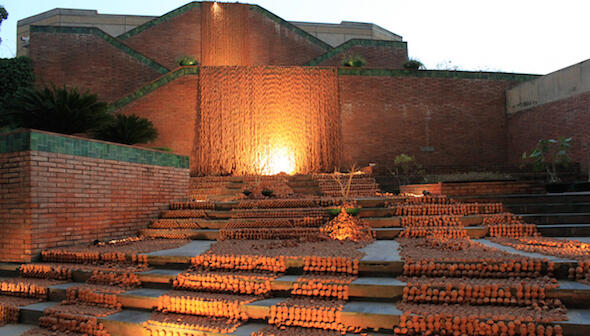 He’s been called the "maverick genius" by his critics. According to insiders, Manav Gupta is piped to be the next big thing in international art.

One of India’s most erudite and versatile contemporary artists, Manav Gupta has reinvented the language of clay by infusing true originality of thought and treatment in the humble produce of the potters wheel. With works sold by Christie's, Bonham's, Philip de Pury and in several private, corporate, and public collections, he is widely exhibited around the globe.

Recently Manav executed perhaps the two biggest solo commissioned artworks originating from India in the past few years: a world-record, five-floor, ten-thousand-square-foot mega mural at the corporate giant Airtel’s headquarters during which he invited thousands of employees to come and experience painting with him; and an Indo-Bhutan friendship mural of twenty-foot-high canvases in Bhutan.

His passion for public art is long standing—a striving of the thought and belief that embraces and explores the juxtaposition and dichotomy of the universality with the exclusively isolated, the iconic and iconoclastic.