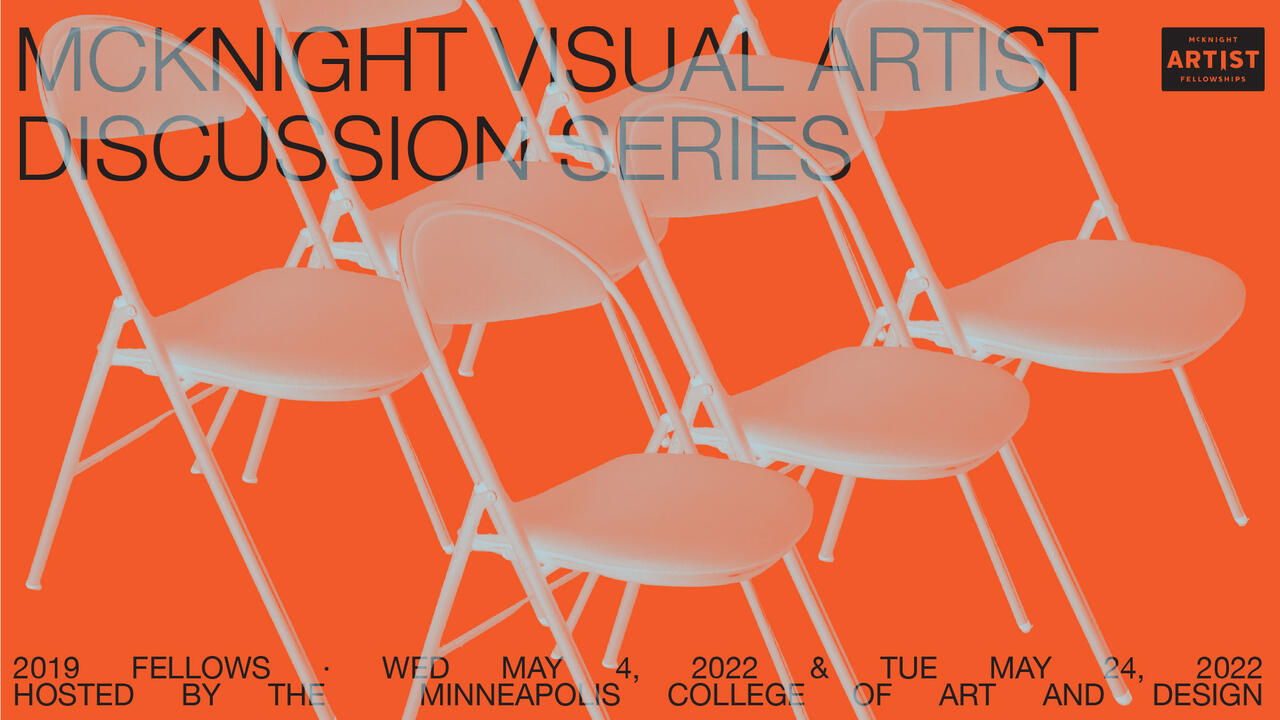 Join us in Auditorium 150* or online via Zoom.

The Minneapolis College of Art and Design is pleased to present the McKnight Discussion Series featuring Janet Dees, curator of modern and contemporary art at The Block Art Museum, Northwestern University, in conversation with McKnight 2019 fellows Leslie Barlow, Mary Griep, and Melvin Smith. This event is free and open to the public; all are invited to attend.

This program pairs a visiting critic with three McKnight Visual Artist Fellows and offers attendees an opportunity to learn more about the fellowship recipients as well as how their work intersects with broader contemporary art ideas and concerns. This event is generously supported by the McKnight Foundation.

*Non-MCAD guests must RSVP via Eventbrite.

Janet Dees is the Steven and Lisa Munster Tananbaum, Curator of Modern and Contemporary Art at The Block Museum of Art, Northwestern University. Prior to her appointment at the Block, Dees was curator at SITE Santa Fe, where she worked since 2008. In addition, her experience includes educational and curatorial positions at the New York African Burial Ground Project (now the African Burial Ground National Monument), The Metropolitan Museum of Art, The Rosenbach Museum and Library, and the Paul R. Jones Collection of African American Art at the University of Delaware. Dees was a part of the curatorial team for Unsettled Landscapes, the inaugural SITElines: New Perspectives on Art of the Americas biennial (2014). Her 2015 exhibition Unsuspected Possibilities: Leonardo Drew, Sarah Oppenheimer, Marie Watt was supported by an Artistic Innovation and Collaboration Grant from the Robert Rauschenberg Foundation. She is the recipient of a 2018 Curatorial Fellowship from the Andy Warhol Foundation for the Visual Arts to support the development of the forthcoming exhibition A Site of Struggle: Making Meaning of Anti-Black Violence in American Art and Visual Culture and has been an affiliate of Northwestern's Center for Native American and Indigenous Research since 2018.

Leslie Barlow is a visual artist, educator, and cultural worker from Minneapolis. Her life-sized oil paintings are inspired by community dialogue and personal experiences, and often serve as both monuments to community members and explorations into how race entangles the intimate sphere of love, family, and friendship. Barlow is a recipient of the 2021 Jerome Hill Fellowship, 2019 McKnight Visual Artist Fellowship, the 20/20 Springboard Fellowship, and four Minnesota State Arts Board grants between 2016 and 2021. Her work can be viewed in collections around Minnesota including at the Minneapolis Institute of Art, Minnesota Historical Society, Weisman Art Museum, Minnesota Museum of American Art, and US Bank Stadium. Barlow earned her BFA in 2011 from the University of Wisconsin-Stout and her MFA in 2016 from the Minneapolis College of Art and Design. In addition to her studio practice, Barlow has taught at the University of Minnesota, Metro State University, and Carleton College. Barlow also supports emerging artists at Public Functionary as Director of PF Studios, is a part of the Creatives After Curfew mural collective, and is a six-year volunteer for the organization MidWest Mixed. Barlow’s work is represented by Bockley Gallery.

Mary Griep’s Anastylosis Project, begun in 1998, is a series of large-scale drawings of medieval architecture. The project is witness to the accelerating loss of cultural heritage, questions what is saved, and explores what it might mean to document the work of the past in an engaged practice. Three years as an artist-in-residence at the Center for the Study of Religion and Culture of Payap University - Chiang Mai, Thailand, rooted this work in scholarly and physical immersion in each chosen site. Recent work making artist books asks whether an engaged observer can witness in ways deeper than the “Grand Tour,” drawing attention to the many problematic ways westerners have experienced and presented the world. Griep received a BA from Macalester College, a MALS from Hamline University, and is currently based in Northfield, Minnesota.

Melvin R. Smith’s artwork has been exhibited and collected across the country for the past forty years. His vibrant collage paintings and sculptures focus on the African American experience through the use of the found object. Born in Oklahoma, Smith obtained a BA in journalism at the University of Minnesota, Twin Cities. He started making collages in the early 1980s and had his first solo show in New York at the Peg Alston Fine Arts Gallery in 1996. In 2000, this self-taught artist was honored with a PBS documentary on his life and art titled The Long Way Home. A recipient of a 2018 Minnesota State Arts Board Artist Initiative Grant, Smith and his wife and fellow artist Rose J. Smith were featured in the 2019 two-person exhibition Remembering Rondo at the Weisman Art Museum. The husband and wife duo also founded the Oklahoma Museum of African American Art in 1997.